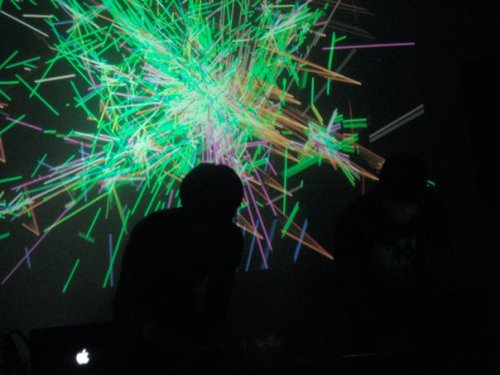 In one of Dislocate’09 program, a performance session is being held presenting several local artists from Japan and residency artists in Dislocate’09 – Mediations of Locality. In this session I have a chance to meet Kanno So, a media artist from Japan that I met during in Yogyakarta. After a nice reunion, Kanno and I arrange to create a simple audio-visual collaboration for the performance at Loop Line, Sendagaya, Tokyo, Japan, where the performance session will be held.

Responding to Kanno’s Jamming Gear, which his latest work and still developing it further, I responded using a modified squareGEM pd patch that i developed since 2008. The modification is to connect squareGEM and Jamming Gear through Open Sound Control (OSC) by wireless connection. With receiving data from Jamming Gear, semi automatic squareGEM could be easily creating an interactivity through the data that is received from Jamming Gear’s rotations, length of duration etc.