Friday 19 April 2013, I organized a gig by a collaboration with Independent Archive and Resource Center (IARC) Singapore and Ujikaji Records. It’s started that I wanted to pay a visit to my friends in Singapore, and so I thought it would be nice to gather all them once in one small gig. Mark Wong from Ujikaji hook me up with Johari Jordan Rais from IARC and so we made a small plans together to do the gig at IARC headquarters. My friends from Rumah Budaya Siku Keluang Pekanbaru Sumatra also joining us, Adhari Donora, Ricky Kurniawan (Coki) and Monica Moerghasini that collaborate in a band called Microtron, took the liberty in flying to Singapore to participate in these gig.

Several days before the performance, we stop by at IARC before/after the activities we did at Lasalle, to do some coordination on the organizing the gig. We met Lee Wen, the Artistic Director and Jordan Johari Rais The Operations and Audio Archive Managerof IARC. They were just finished organizing a performance of their artist in residency program; Mike Cooper. Unfortunaltely I didn’t met Mike, he left just after I came. So we arrived just at the end of their chaotic time of organizing things at IARC. Still during a bit chaotic time, it was a very warm welcome from Lee Wen and Jordan when we were there.

Just before I came to Singapore, I met Malek Lopez, a musician from Philippines who I met years ago in Indonesia. He happened to be performing in Ho Chi Minh City while I was doing my residency. Malek informed me that he have moved to Singapore to teach in Lasalle College of The Arts. So I contacted him so he can join us in the gigs. I also met Yuta Nakayama from Japan when I was hanging out with my good friend Luis and Anne-Marie.  I heard he’s doing circuit bending and DIY electronic stuff, so I asked him to play along with us. He said yes. 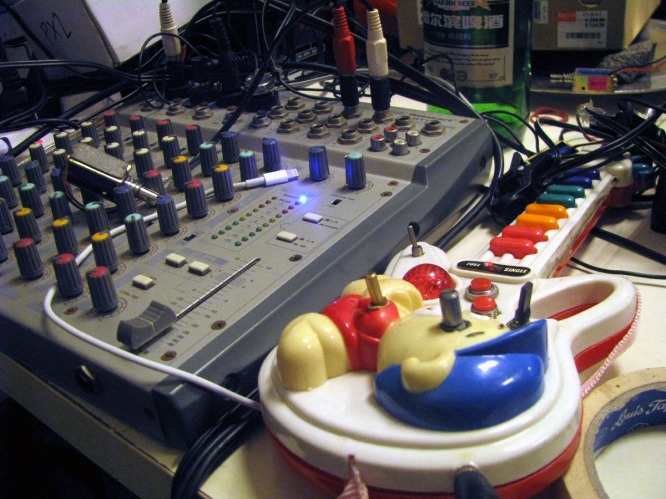 Along with Nelly Vowel an experimental musician from France and an old friend I met during Mal au Pixel in Paris, we have 5 performance. There’s another one who unfortunately can’t join us, Man Troj. I really wanted him to play. Bad scheduling, he can’t perform because he have another things to do. But among all, I really respect how he have been taking care of my friends and I during our stay in Singapore. I hope to play with him in another chance.

Analog noises from several DIY instruments, including some stuff I used from Kenalirangkaipakai (thanks bro!), Feedback sounds, 8-bit noises, and a digital synth composition.

I never watched Nelly’s performance before, but I know her style. She keep it simple and minimal. Always does and always will. Loop from her voice combined with digital beats and sequenced ambient noise.

Crazy tunes from his Circuit Bent Toy guitar mixed with loud sounds from analog-controlled solenoid  beating drum cymbals, cans and rocks. My first time watching his performance and I was enjoying it.http://youtu.be/UkaYIJCORzY

His performance was most complex for tonight gigs. His background as a composer could be seen in his play. Combining breakcore beats, glitch, ambient and IDM style of composition. Very enjoyable.

At the end of the show we all do a little bit of jamming. Turning it on! Jordan joining us with his free style saxophone playing. 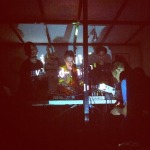 Bellow are several good documentation of the show from IARC, divided into 5 part. enjoy!