If you think of a resonator, it resonates differently depending on its’ shapes and size. Naturally, they also oscillate to some frequencies with greater amplitude than at others. As shape and size of human ear canals and cochlea (ear organ) vary between individuals and (of course) vary between species, does this affects our sensitivities on certain tones of sounds? Or maybe it also affects our taste in music? These are the basic questions of the instrument, Nadalaut. 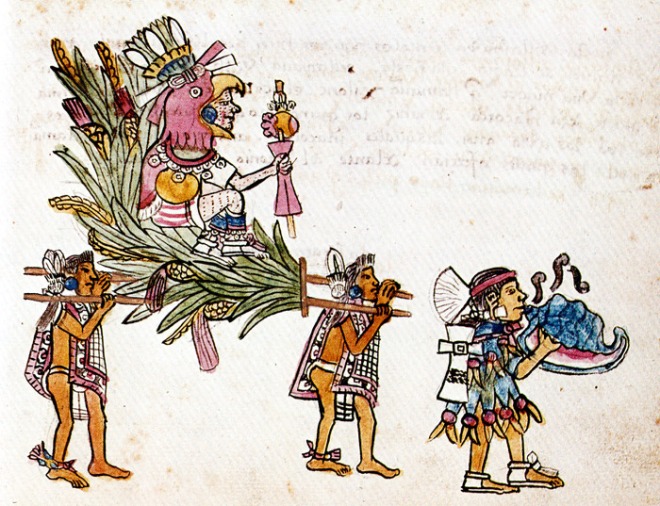 A shell trumpet blower known as a ‘Quiquizoani’ is playing in the front of a procession. The image taken from the Codex Magliabecchiano of the Aztec p. 23.

The making of Nadalaut began before the third iterations of The Instrument Builders Project – NGV started in Melbourne, Australia. I stumbled upon an old Conch shell lying in Lifepatch and I remembered when I was little, I used to hear “the ocean sound” from the shells. I always fascinated by the sound, especially when I combined two different shells on both of my ears making psychedelic harmonic amplification. As simple as it is, shells have been used as early instruments in human civilisations, and I remembered pretty well that my friend in Mexico told me that the Aztec had used Conch shell as a musical instrument for their traditional procession. 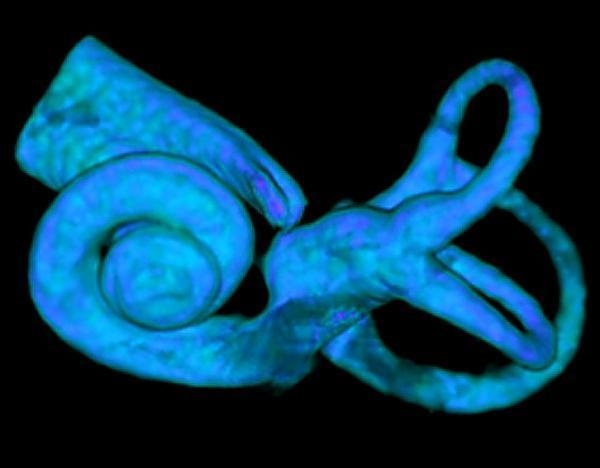 Three-dimensional reconstruction of a human inner ear obtained from high resolution CT scans similar to the images used to measure cochlear radii for the species analysed in the study.
Credit: Courtesy of Darlene Ketten

The other thing that visually triggered my idea is the shape of Conch Shell is looks like a Cochlea, an inner part of humans and mammals hearing organ. Scientific journal by Vanderbilt University. “Low-frequency Hearing Linked To Shape Of The Cochlea.” ScienceDaily, 28 April 2008. mentioned: Shape matters, even in hearing. Specifically, it is the shape of the cochlea, the snail-shell-shaped organ in the inner ear that converts sound waves into nerve impulses that the brain deciphers, which proves to be surprisingly important. Just like in instrument, shape do matters. Both of Cochlea and Conch Shells are made naturally which made me wondering the link between natural shapes with sound. As the coil-shaped Conch Shell and Cochlea amplifies certain frequency and the visual resemblance, all of these was my consideration to experiment with the Conch Shell. My idea was simply to brought sounds produced by natural shapes to the audience through visual and sonic experiences, not through scientific explanations.

So I brought the Conch Shell from Indonesia all the way to Melbourne with several ideas on my mind and is hoping it could start as a base idea for collaboration. I met Dale Gorfinkel and we began to start experimenting with the shells. Started with a failure in a simple amplification of the shells, Dale, who had experiment with using found materials as resonance took the shells back home and to try if it responds to some vibraphone bars. The result was shown on the video above.

The acoustic sound in which the shell produce was amazingly loud and so we didn’t need any electronic amplification at all. I began to think that in term of an instrument, I wanted it also to be playable by humans while Dale also thinking that it should play by itself as an installation when no one is playing with it. With the consideration of the concept and 2 weeks time duration of the residency, we agree to keep things as simple as possible. And so we tried to hang the Shell like a pendulum while using motor to constantly creating friction with the vibraphone. The experiment we did shown in the video above. 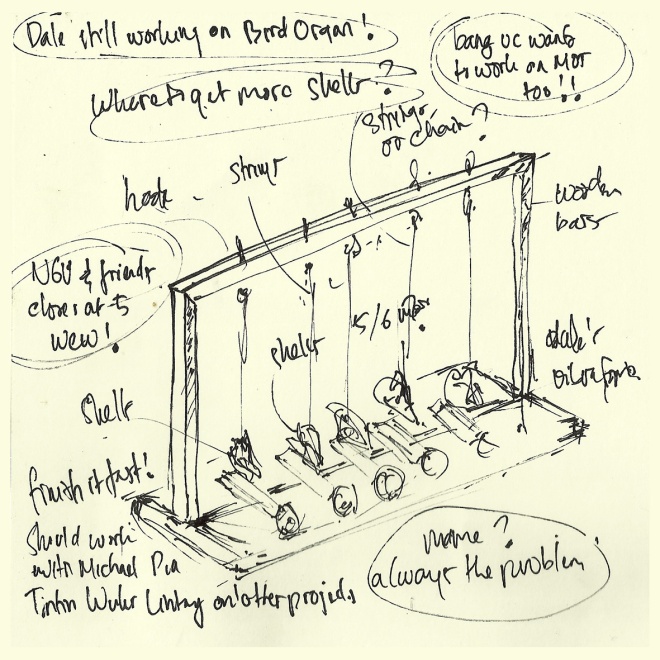 After those experiments, I began to draw some plans and work on the structure. Problems showed up as we wanted to use several shells for the instrument while I only brought one with me from Indonesia. I was hoping that somehow I could get several local Australian shells on the beach of Melbourne, in-which-in-short-I-fail-hardly. There are no such shells in Saint Kilda Beach of Melbourne, so we had to get some shells from the northern part of Australia. Other problems were many, as all the IBP team (even the curators!) were multitasking with other projects, taking care of the ongoing exhibition, there weren’t enough time to work in NGV (Wukir did a hammer instrument out of this frustation ^^), Jaycar anybody? again!?, but above all it was a very nice working environment for all of us (not only the IBP team, all the friends that showed up and hang out with us or drip by to say hi!) and we always ended up in some bars after the days end to hang out together.

I have learned and share beyond my limit with the work of Nadalaut together with MOS, Noble Wave, Glassbell, the performance in M-Pavillion, the performance in OK Video 2013 and Squaresynth workshop with MediaLab Melbourne during The Instrument Builders Project. It is one of the highlight of my experience. In the end of this post, I would personally thanks to the team (hold your breath, it’s a long list :D):